Images of Mary Through the Ages

Sandro Botticelli (Florentine, 1455 – 1510): Botticelli’s “Madonna of the Book” was painted around 1480. It is exhibited at the Museo Poldi Pezzoli in Milan. Botticelli, under the patronage of the Medici was the leading Florentine painter of his time.

Artist’s Note:”The completion of this Botticelli was facilitated by the kindness of a stranger at the Museo Poldi who responded to my pleading emails for a picture of the book. I would have been unable to complete the script on the book without his help. I am also indebted to my husband who supplied 23 carat gold leaf and powdered gold for the haloes. It was really a pleasure to recreate this work. Master Botticelli taught me much.

Raffaello Sanzio (Italian, 1486-1520): The original of this painting, attributed to Raphael,  (aka Rafael) is the reverse image of the one pictured here. Raphael’s original is displayed at the Louvre in Paris. It is also called “Madonna with the Veil” and has been extensively restored.

The virgin, kneeling on the ground, lifts the veil from the face of the slumbering child so that St. John may see Jesus. The skyline in the back is Roman. It shows the Pantheon lying in the nook of the Tiber Valley, partially blocked out by an ensemble of ruins. According to some sources, the painting was divided in two halves, covering casks at Pescia. Found by an amateur, it was skillfully repaired, eliminating all traces of the break.

The Arrowood copy of Raphael’s Madonna della Sedia was displayed at the M & G at BJU from 2007 thru July 2008. It was exhibited again at their satellite museum at Heritage Green from October 2015 until February 2017. Sadly the satellite closed permanently at that time. On a brighter note, there is hope that the parent museum will relocate somewhere near downtown Greenville, SC when it reopens.

The M & G at BJU was recognized as the finest collection of religious art in the Western Hemisphere. Paintings of European sacred art from the 14th through the 19th centuries trace the religious, artistic, and cultural history of Western Europe. Included are important works of major artists such as Rubens, Tintoretto, Veronese, Cranach, Gerard David, Murillo, Ribera, van Dyck, Honthorst, and Doré.

Raffaello Sanzio (Italian, 1486-1520)
Raphael’s original, painted in 1513, may be viewed at the Palazzo Pitti in Florence.
A child prodigy, eleven year old Raphael took over the family studio when his father died. By the age of sixteen, he was acclaimed as a master in his own right, and when he died at thirty-seven on good Friday 1520, it is said that even the Pope wept.

Artist note: Look closely at the blue fabric of the Madonna’s skirt. I painted Raphael’s lovely Madonna in 2001. In 2007, It was included in a special exhibit with a host of masterpieces at the M & G at BJU as a contemporary example of “Learning from the Masters”. In the fall of 2015, fourteen years  after I painted my copy, I was excitedly preparing it for another museum stay.  In a search for where Raphael might have signed his name, I discovered what could have been an R…. The next morning, as I once again tried to make it be for Raphael. I thought to myself, “if he had just put an S there too, I could be sure”…Suddenly I saw the S and I was thrilled. Could it be for Raffaello Sanzio?

Giovanni Battista Salvi da Sassoferrato (Roman, 1609-1685): As was customary in his time, Il Sassoferrato is often referred to only by the town of his birthplace. He was as gifted a draftsman as any of his contemporaries, and was known for his commitment to Raphael’s style. The movement of the dramatic drapery of his Virgin Annunciate may have been influenced by the Roman sculpture of Gian Lorenzo Bernini.

According to Selected Masterworks from the Bob Jones University Museum and Gallery, this painting is one of two in which the artist used the same composition… which is unusual because Sassoferrato mass-produced many of his devotional paintings.

Guido Reni (Italian, 1575-1642): Reni’s Madonna, painted around 1628-30, is on display at the North Carolina State Museum of Art. It has been said that Reni would become very distraught if he was unable to show his devotion to the Virgin Mary daily. “Many believed,” wrote Reni’s biographer in 1686, “that because of his great devotion, the Virgin deigned to appear before him.”

Giuseppe Bartolomei Chiari (Italian,1654-1727) Chiari, one of the leading Roman painters of his time, received numerous commissions from Pope Clement XI. Chiari’s 1707 original, owned by the M & G at BJU in Greenville, South Carolina, may be one of his finest works.

Johann Overbeck (German, 1789-1869): Painted in the 1800’s, Overbeck’s original “Visitation” remains in the M & G collection at BJU in Greenville, South Carolina. It depicts a young Mary visiting with Elisabeth after the conception of their sons.

William Bouguereau (French, 1825-1905):”Fraternal Love” was painted in 1851 and is displayed at the Boston Museum of Fine Arts. Bouguereau is well known for producing life-like skin tones and for rendering the human form with accuracy and beauty. While there are over 800 paintings attributed to him, it is possible that some were the work of his exceptional students.

Characters from The Bible 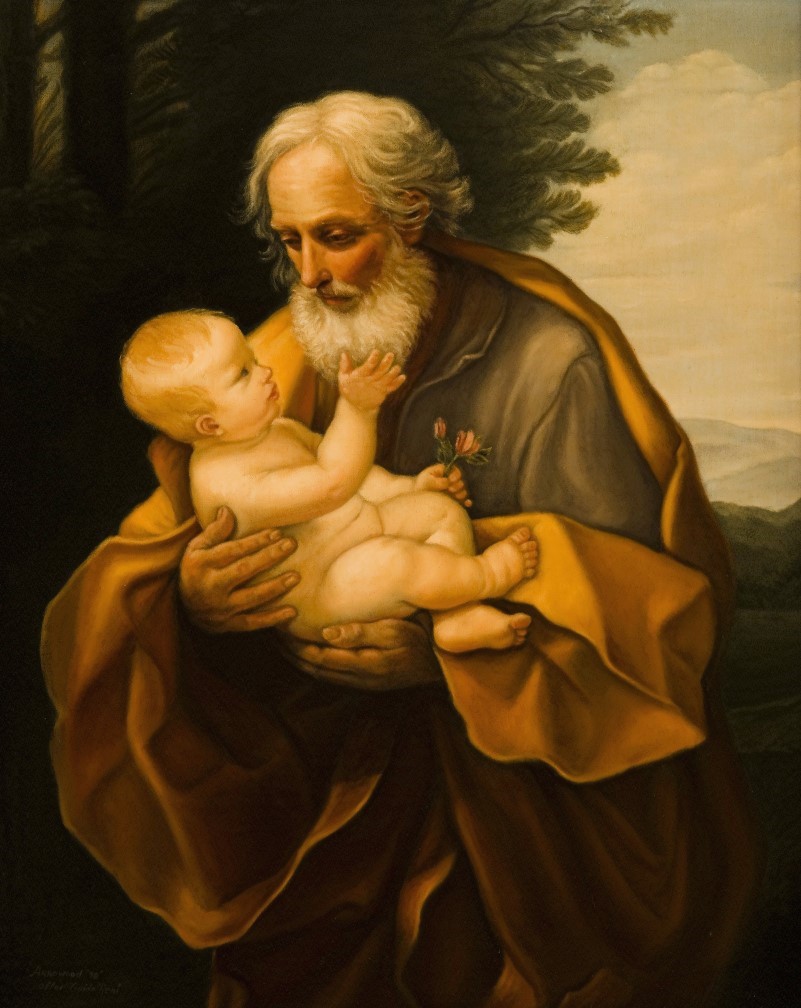 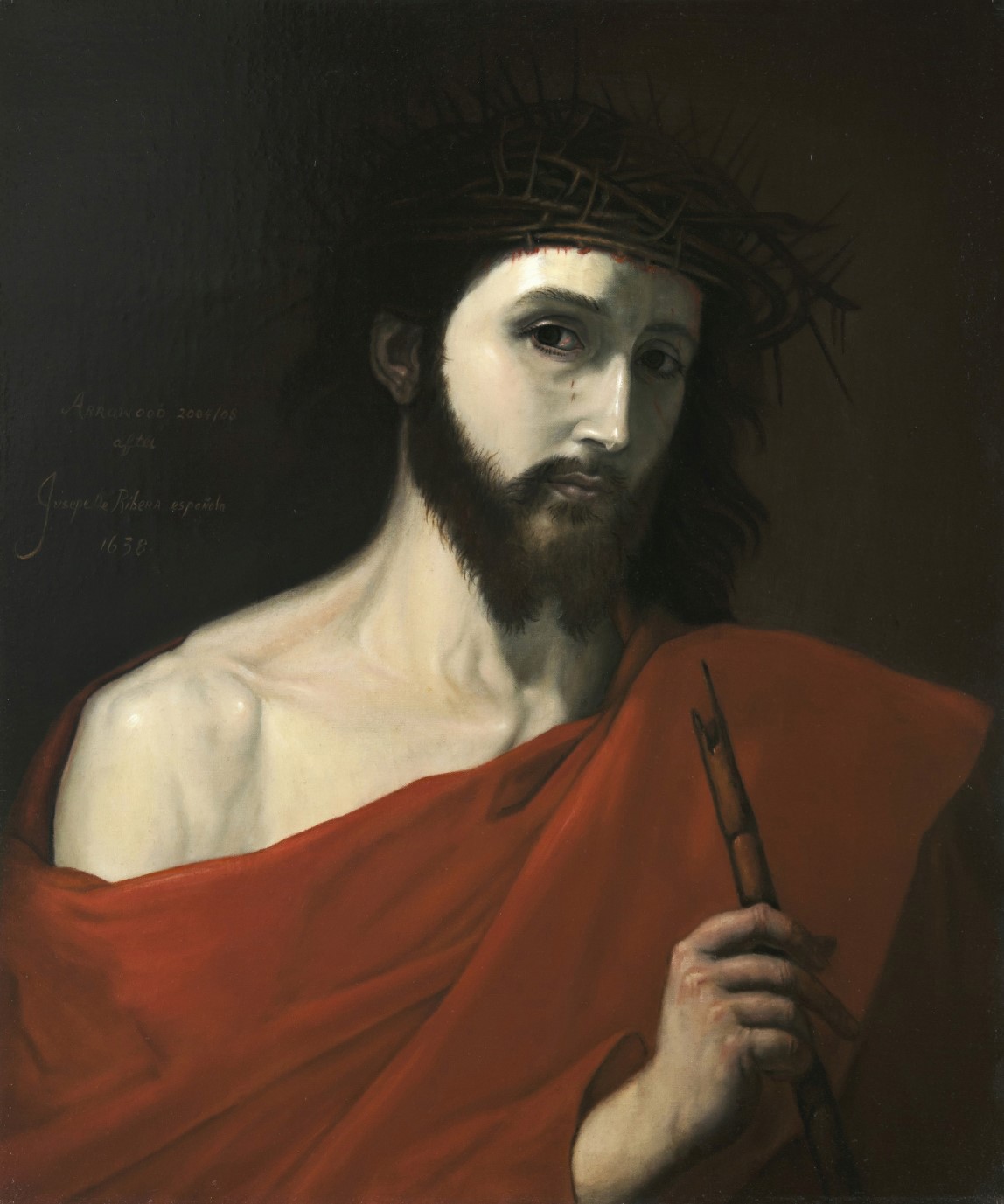 Jusepe de Ribera also called Lo Spagnolletto, (Spanish, 1591-1652) The original of Ribera’s masterful yet sensitive portrait of Christ has been in the permanent collection of the Museum and Gallery at BJU in Greenville, South Carolina since 1952.

My appreciation of the BJU Museum and Gallery began as a child. I was fascinated by the museum and “Ecce Homo” was my favorite painting. At that age, I was not aware that there was an explanation for why the eyes of Christ followed me around the room…At this age, I am still awed by the fact that He watches me no matter where I am.

*June 29th, 2008: Like me, my artwork often remains a work in progress, in need of revision, improvement, and sometimes, forgiveness. My start on Ribera’s “Ecce Homo” in 2004 is a prime example. I didn’t realize how much so, until I placed it beside the original at the Museum and Gallery at BJU. Ribera would not have been impressed! I am indebted to the Museum and the curator, John Nolan for the opportunity to improve my work. As I worked on my Ecce Homo at the museum, Mr. Nolan’s gentle questions and comments in passing, guided me to “see solutions” to unrealized problems…

Dominico Zampieri (Bolognese,1581-1641) A student of Carracci, Il Dominichino-as he was known-was one of the most important upholders of the tradition of Bolognese classicism. His original St. John is in the collection of the M & G at BJU in Greenville, South Carolina. The painting includes the symbolic attributes of St. John…The snake alludes to his having withstood poison as proof of his faith. The scroll and book represent his writings.