2003:  Soon after my first open house, I had an epiphany for my third Pilate’s Wife, now known  as She Stands Alone. It occurred one sunny winter afternoon as I studied my Pilate’s Wife II,  and was nostalgically remembering *secret childhood trips exploring downtown Greenville, South Carolina with my sister Lynn.  *(Our parents didn’t know about these unsanctioned adventures until we were grown , but that’s another story.)

Often, our childhood excursions included quiet time in a wonderful book filled room above Brown’s Antiques. As I was reliving the memory of finding the red cloth bound book entitled, “She Stands Alone”, I turned away from Pilate’s Wife II, and suddenly the words exploded in my mind, SHE STANDS ALONE! Immediately, she appeared and I pictured her with my eyes wide open, evolving within minutes, almost more quickly than I could hold the thoughts and images. She was standing there, alone on Pilate’s porch, it was dark, there are crosses somewhere in the background, there is a bowl on the table where her husband washed his hands, a bloodstained towel in her hands, symbolic of Pilate’s quilt…guilt that he could not wash away. She is tearful, and in anguish for Pilate’s part in the death of this just man.

I called my husband at work to share this inspiration for a life-sized, standing Pilate’s Wife. He was excited for me, and we both began to look for a model. “She Stands Alone” was that painting that I had to do. I had seen her tears, and empathized with her pain. Envisioned in 2003, and called finished in 2016, it was a painting that had been planted in a child’s mind, by a red cloth bound book bought for a dime circa 1959.

The late ‘Bud” Trunick’s specialty was  “bulk material handling”…what an understatement!!! In material handled, the volume at Twin Buttes was nearly twice that of the Oroville Dam project in California and ranked alongside the famous Aswan High Dam in Egypt. Bud Trunick is remembered for his participation in both the Oroville Dam with McDowell Wellman and the Twin Buttes project with Hewitt-Robins. Out in the Arizona Desert, a handshake between Trunick and Anaconda Company president, Jack Knaebel, sealed Hewitt Robbins 10,000,000.00 participation in the Twin Buttes project. In 1966 and 67, Trunick was Hewitt-Robins’ estimator, salesman, engineer and site project manager.

The Hewitt-Robins complex at the south end of the Anaconda copper mining pit was engineered to move both overburden and ore, either separately or simultaneously. It was composed of two side-by-side, sixty-inch conveyors that sloped to the bottom of the pit… At a little more than halfway down into the pit, two other sixty-inch conveyors split off obliquely from either side of the main conveyors. In all more than 50,000 feet of Hewitt-Robins steel cable reinforced rubber belt were employed on the mining project at Twin Buttes…Thus “Copper by Belt” as indicated on the magazine cover in Mr. Trunick’s hands.

At the top of the magazine, I have dated and aged the magazine to further reference this special time period in Mr. Trunick’s past. When the portrait is signed and dated 2007, it will establish that this is Mr. Trunick – forty years after Twin Buttes…As Mr. Trunick approaches his eightieth year, he continues to solve engineering problems across the country. Armed only with a calculator, graph paper, and a pencil, he and his creative mind are still in demand by others with computers and a lot more letters after their name.

Bill Zimmermann’sTribute to “Bud” Trunick”     I learned late yesterday of my friend’s passing. My last contact with him was 6 or 8 weeks ago via telephone wherein he sounded tired and frail… I felt rather helpless but vowed to find my way from Omaha to Greenville to renew our mutual interests one more time. Well, it turns out I didn’t make it and still wouldn’t have known the outcome except for a chance remark made by a mutual acquaintance…

I located the obituary run in the Greenville newspaper and then decided to search for your website via the Greenville artists site. In doing so, I came across the splendid painting you did of Mr.Trunick…This led me to a recent painting you did which really captured my last memory of him. He and I had flown in my Plane to a jobsite in North Carolina, where we clambered on a very large and very high Stacker. Actually, Bud should not have attempted the close inspection of the machine, but two 80 year-old engineers lack the common sense of one 40 year-old – so we both overdid that day. Bud was wearing the same hat as you show in the painting. He was a very special man in the Industry that we both chose for our life work. He had abilities that I have not seen in others. He will be missed…

This man was truly unique and the world should recognize this… Bud was very contributory to the building of the Oroville Dam….I remembered the fearlessness of Bud and his fellow Engineers in how they approached the magnitude of… {the Oroville Dam project}…

I can also locate the Stacker photo from North Carolina that Bud and I visited 2 or 3 years ago. Bud designed the machine which is quite large for a Mast Type Stacker. (This style of machine might have an artistic flair to it that you could use as background for a future painting.) It reminds me of a Suspension Bridge which so many Photographers find to be an interesting subject. This style of machine was part of Bud’s first assignment at Barber-Greene in Aurora and it was one of the final machines he designed for us. When the owners in North Carolina expressed deep concern for how it would stand up to a future Hurricane, I brought Bud up to their coastal jobsite to provide Engineering reassurance. He later took a fall that day as we dismounted from the machine inspection. I vowed not to put him in that kind of jeopardy again. If I can contribute anything to his memory, please count on me to assist. ” Bill Zimmermann 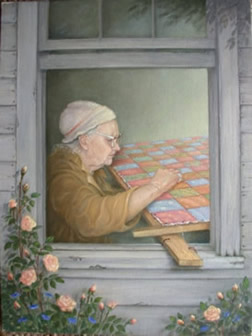 In the late seventies, I recorded my Grannie Holliday playing the harmonica and then singing. Brightwater Studios recently mixed her voice and the harp music. The little CD reminds me of the sounds of Appalachia…Grannie came by covered wagon thru the North Carolina mountains and settled in the old school/farmhouse in Liberty, South Carolina where I was born…Quilting Toward the Light is set in that old farmhouse where her life ended and mine began. I have many sweet memories of that overlap in time between Grannie’s life and mine. On Sunday afternoons and bare foot summer days, my sister and I lived “Little House on the Prairie”.

(Click on MP3 link above to hear Grannie Sing)

A Letter From Grannie

“I am eighty-three years old. This is Georgia Holliday, wife of Simon Peter Holliday which passed away last December 29, 1977. We lived together sixty years in the old home place near Liberty, SC.

My husband, Simon, use to play a harp back when Charles was a little boy. When Charles was 49 years old, he saw a harp on sale at a garage sale. He remembered hearing his Dad play and he bought the harp. It had been forty years since his dad had played the harp, but it didn’t take him but just a few minutes to begin playing a song. Dad inspired us all for 18 months before he passed on.

I still have the harp in memory of him. I had never put one in my mouth before, so one day, I picked it up and said to myself, “I believe I will see if I can find the notes on it.” So I did begin to find them. I have started playing songs…one is “I Am Going Home” and another is “Never Grow Old” that I can play very well – which is a gift of God and a comfort to me as I am alone, just the Lord and me.

How beautiful Heaven will be!”

Many years ago, when I was a young teenager (1962 or 63), an elderly great uncle asked me to make a painting from an old print.  The great uncle and the print are both gone now and I have spent hours searching the Internet for the original artist. If you know please contact me at yha@charter.net

The artist has been located – More about that later.

Click Here to return the top of this page